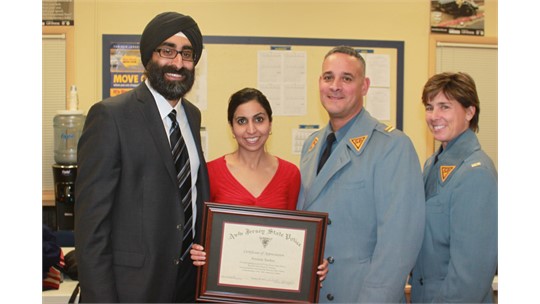 Since 2003 SALDEF, has made it a mission to train law enforcement officers on Sikh religion and culture. Over the past 15+ years have partnered with the U.S. Department of Justice to train over 135,000 members of local, state, and federal law enforcement nationwide.

Our program has a proven record of:

This past year SALDEF has trained thousands of officers nationwide from the west coast to the east coast; as well as invested in developing new trainers to accommodate the rising demand for our LEPP program. For example, SALDEF was approached by the New Jersey Attorney General’s office to develop a training that would be used to train 30,000 officers across the state  on Sikhi and how to engage with the community. This builds off the similar success we have had in California and Washington and will serve as a standard for all states on Sikh cultural trainings.

SALDEF has been actively engaged in training and working with law enforcement in Houston and across Texas for the last decade. In 2015, SALDEF and then Sheriff Adrian Garcia partnered to amend the Harris County Sheriff’s (HCSO) uniform policy to allow for the accommodation of religious articles of faith and attire. Following this change and the success of several HCSO officers, SALDEF Regional Director Bobby Singh worked closely with Houston Mayor Sylvester Turner and Houston Police Department (HPD) Chief Art Acevedo to develop an  accommodation policy for HPD-- the 8th largest police department in the county!

SALDEF’s LEPP program is designed to increase awareness among the law enforcement partners about who Sikhs are, the religious mandate we honor, and to open doors to service. As a testament to our partnership with Law Enforcement, our materials have been added to the curriculum of the states of California and Washington, the city of Las Vegas, NV and the Transportation Security Administration (TSA). Consider the following testimonial from a participant of our training:

“This session opened my eyes.  I had no idea there were so many Sikhs in our area and about their turbans and beards.  The material was relevant to our jobs as investigators and the presenters were lively and easy to understand. They answered so many questions I didn’t even know to ask.” – Agent, Federal Bureau of Investigation (FBI), Philadelphia, PA

Some of the state and local law enforcement agencies we have worked with include:

We ask your support for this work, so that we can continue this work and help build partnerships with Local, State and Federal agencies. Every training session involves the cost of materials, the SALDEF trainer's time and travel costs; although any amount of donation is helpful and appreciated, we ask you to consider the pledges that will cover these costs.

Thank you for continuing to work with us to ensure Sikh Americans rights are protected and that our Sangat is accurately represented as a vibrant part of our nation's fabric.

Helps cover the printing cost of all training materials

Helps cover the travel expenses for one organizer

Helps underwrite the full cost of a single training