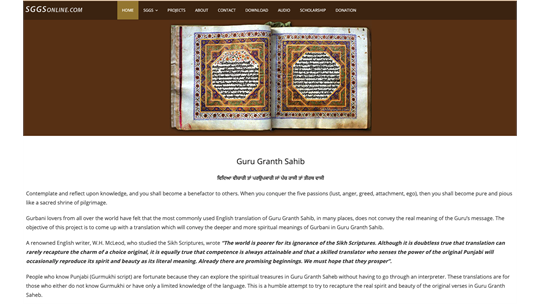 A project of Sikh Education Foundation

On a trip to Mexico, the lead volunteer met a Mexican Gursikh in Full Turban and beard. Intrigued, he questioned him how he became a Sikh. After reading Guru Granth Sahib in Spanish he fell in love with the Sikh way. This created the vision to translate the SGGS in all the languages of the world.

The Guru Sahib's message has not been translated in any Indian language.  We have been successful in Creating Gutkas (Japji, Sukhmani Sahib, Rehraas Sahib, Asa Di Vaar Sohila) for Tamil, Telugu, Malayalam, Gujarati , Marathi.

Any contributions will help further this timely translation work!