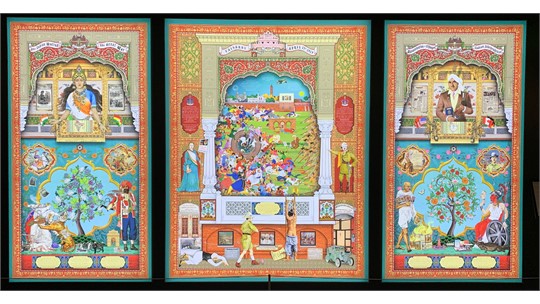 A project of Sikhlens

The artwork itself is designed in three parts as a triptych. The center panel (shown above) largely focuses on the massacre – namely, the moment on April 13th, 1919, when an officer of the British Raj, Brigadier-General Dyer, ordered his troops to open fire, on a peaceful demonstration of unarmed Indian civilians in the city of Amritsar, Punjab in northern India.

2019 being the centennial of Jallianwala Bhag, the film was screened at multiple film festivals in the United States and has been picked up by a major streaming service for distribution which requires making some changes to the film to meet the standards for distribution platform.

Jallianwala: Repression and Retribution is the story of our heritage and needs to be told to audience at large. Your donations will help make those changes so it can be shared more widely.