A project of SALDEF 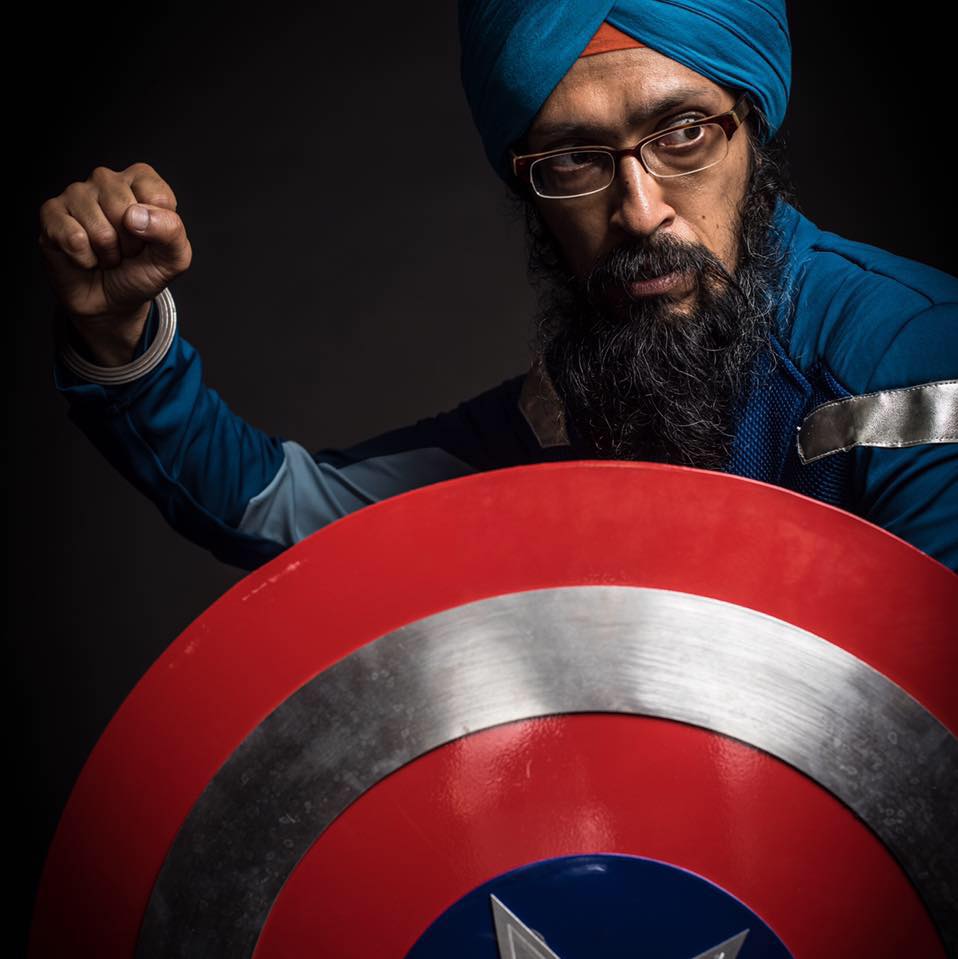 Vishavjit Singh is a former Media Fellow at SALDEF. Given this connection and the huge potential impact of this project SALDEF is thrilled to support this animation film as an Associate Producer and acting as a fiscal sponsor for this fundraising drive on DVN. Sikhlens and UNITED SIKHS are serving as Executive Producers highlighting the broad community excitement and commitment for this project.

This short animated film tells the life story of Vishavjit Singh, who after a lifetime of facing prejudice, self-doubt and violence, finally finds acceptance by becoming the superhero Sikh Captain America.

The goal of the project is to create the most powerful and successful short film ever made about an American Sikh story - and by doing so teach millions of Americans about Sikhism as well as 1984 and the post-9/11 intolerance that exists against Sikhs. Given the importance and beauty of the story, we believe the film has the potential of playing at top film festivals and winning an Oscar in the category of animated short.

Vishavjit Singh became a cartoonist in the aftermath of the tragedy of 9/11, creating cartoons about Sikhs and Sikh issues. In 2011, one such "Sikhtoon" was an illustration of Captain America with a turban and beard who fights intolerance. Eventually, the success of this particular Sikhtoon inspired Vishavjit to dress up as Sikh Captain America, and challenge perceptions of what an American can look like head-on. He has traveled around the US hosting storytelling sessions in schools, libraries, companies, government agencies using Sikhtoons and his story to communicate ideas about diversity and inclusion.

As part of this journey, Vishavjit worked on a film with Ryan Westra in 2014 called  ‘Red, White & Beard’. It was released in 2015 and garnered international media attention, including being shown on CNN and being featured on the Huffington Post front page. Given the success of Red, White & Beard, Ryan approached Vishavjit to once again make a film together - this time telling his full life story in animation.

Why this film matters:

Outside of India, there are very few Sikhs seen in media. Due to the lack of representation and the statistically small global population of Sikhs as a whole, the vast majority of Americans and the world at large know almost nothing about Sikhs. Lack of knowledge is not only an education and awareness issue, but historically is the root of many issues such as xenophobia, intolerance, racism and violent hate crimes. According to the latest information from the FBI, Sikhs are statistically more likely to victimized by hate crime than any other demographic.

What little knowledge people may have about Sikhs most often boils down to two things: a turban and a beard. It’s no secret that this surface-level in Western media is often depicted in films as the villain or the clown. This is the image that needs to be transformed - and that’s exactly what Sikh Captain America, Vishavjit Singh, has set out to do.

Sikh Captain America is changing the narrative on Sikhs (and anyone else who may not look “traditionally American”) — creating a new American hero that challenges societal expectations and norms. This film also follows his journey of accepting his own identity.

Although Sikhs have made immense progress in public-facing jobs, there is still so much work to be done. It’s important to fight for more accurate, prominent and positive representation in media and in doing so create a more poignant, relatable and expansive space for Sikhs in the world.

People have grown up idolizing superheroes for decades. Sikh Captain America may not fight evil monsters, but he takes on hate and intolerance that are sadly still very much part of our contemporary society. That’s why an animated documentary, much like the superhero cartoons we’ve all grown up watching, is such a unique way to raise awareness about Sikhs domestically and internationally in a style that people of all cultures and ages can enjoy.

We're excited to share that recently the film was written up and published in The Washington Post. You can read the article here.

Our goal is to raise $155k for this project. $120k of the budget will go towards animation, while the remaining $35k will go towards all other expenses including sound design, original music, legal fees, marketing and more.

We have reached 2/3rd's of our goal with the support of over 550 backers.

Vishavjit is a New York City based illustrator, performance artist, speaker and creator of Sikhtoons.com. He got his spark for cartooning in the post 9/11 tragedy when Americans with turbaned and bearded countenance became targets of hate/bias crimes.

For the past few years he has been traveling across the US with his Captain America persona armed with turban, beard and humor to tackle fear, anxiety, bigotry and intolerance. He hosts talks & keynotes on diversity, inclusion, implicit bias, vulnerability & vulnerability in schools, universities, government agencies and companies including Google, Apple, NASA, Congressional Asian Pacific American Caucus & NYC Department of Health. Since the beginning of the Covid-19 pandemic he has been working with the city of NYC and a local NGO UNITED SIKHS on COVID-19 suppression and relief efforts. His work has been covered by a number of news outlets, including the New York Times, NPR, BBC, The Atlantic, Huffington Post, The Guardian and Time Magazine.

Ryan Westra is Los Angeles-based director and cinematographer of documentary and commercial content. Ryan has worked with HBO Documentary Films, Verizon Wireless, Dreamworks, the Atlantic, the BBC, the Coachella Valley Music & Arts Festival, Panorama Music Festival, and has had his work featured on FunnyOrDie, Upworthy, The Huffington Post, and the BBC. Above all else, Ryan is passionate about telling compelling stories that can change the world for the better.

“This will be my 6th documentary about Sikhs and Sikh issues. The other short films were documentaries about Operation Blue Star, ENSAAF and the decade of disappearances, a spinal hospital in Delhi, Sikhs who serve in the American military, as well as another film about Vishavjit called “Red, White, and Beard”. Of these five films, the one that received the most attention and success by far was “Red, White, and Beard” in 2014. Additionally, it was one of the most successful films to ever come out of Chapman University through Sikhlens. It’s clear that the story and image of Sikh Captain America is compelling to a broad audience and is a an entertaining and exciting medium to educate people about Sikhism and Sikh issues. That’s why, since 2014, I’ve been planning on making a second film with Vishavjit, one that would be a more in-depth telling of his story. I believe that this short animation will be the most successful film ever made about an American Sikh and will raise awareness about Sikhs and Sikh issues in the United States and Internationally.”

Sean has directed over 20 hours of television and produced four long form television series for clients such as the BBC, Warner Bros, ABC and Channel Seven. He has also directed music videos for artists like Elton John and ad campaigns for clients such as TWITCH and HBO. He is a strong believer in board-driven story development and is dedicated to building a collaborative studio environment. Sean just recently finished directing and voice acting on the Cartoon Network series 'Monster Beach'.

Ivan has eleven years in the animation industry and has produced content for a variety of clients including music videos form Childish Gambino, Elton John and Gotye, series work for Cartoon Network, Nickelodeon, Disney, Warner Bros., idents for [adult swim], 2D segments for Fallout 4 and Wolfenstein 2 and recently an adult series for WB/ABC called Ginger Snaps. Ivan co-directed the pixelated title sequence for The Simpsons, Rick & Morty and Adventure Time. Currently Ivan has an adult series in development with US streaming service Hulu called Muscles McQuack.

THANKS SO MUCH FOR YOUR SUPPORT!

With your help, we believe we can achieve our goal of making the most successful film ever made about an American Sikh story. Thanks so much!

With this gift you help illustrate a new Sikh superhero character in addition to Sikh Captain America.

With this gift we get to add a family of new Sikh superhero characters in addition to Sikh Captain America.

The Co-Executive Level helps with animating the superhero illustrations.