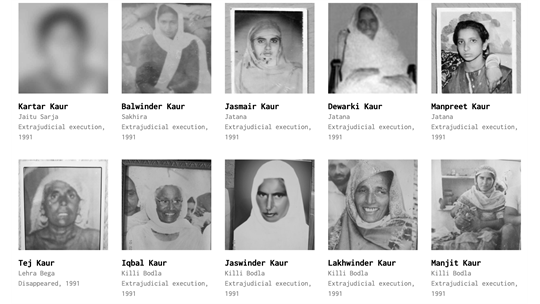 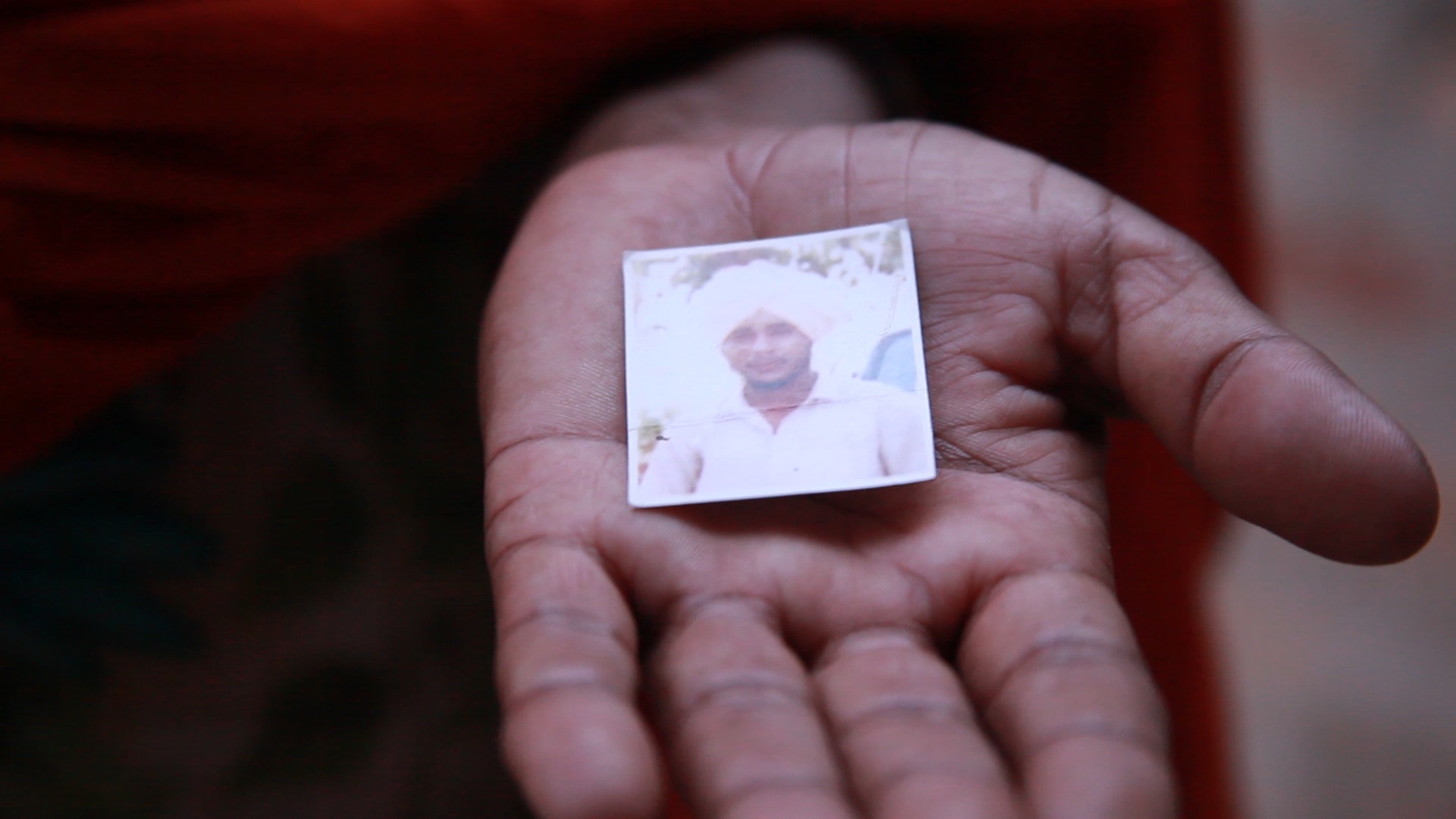 DONATIONS TO THIS EFFORT ARE BEING MATCHED DOLLAR FOR DOLLAR!

I also want to tell you that my sister-in-law, Raj Kaur, was six months pregnant at the time. That [child] was also killed by the police, or died after being born. Afterwards, when I became acquainted with the police employees, they told [me] that, “Gurcharan Singh, Raj Kaur, [and] Kuldev Kaur died while being tortured at Amloh police station.” [I] learned that the police beat Surinder Kaur and then shot her on the same day, and threw the body in the Bakhra River.

Indian security forces targeted female victims for different reasons during the Decade of Disappearances in Punjab.

In the largest human rights documentation project conducted in India, Ensaaf visited over 12,000 villages in Punjab, documenting disappearances and unlawful killings perpetrated by Indian security forces, primarily from 1984 to 1995. In late 2018, Ensaaf released the first data visualization site to map and provide detailed information on crimes against humanity in Punjab, including over 5300 individual profiles of victims, covering over 40 points of information. Users can filter victim profiles; further, keywords within individual victim profiles lead to pages listing other cases sharing the same information, whether it is the identity of the perpetrator, or the village of the victim, among many other intersections. 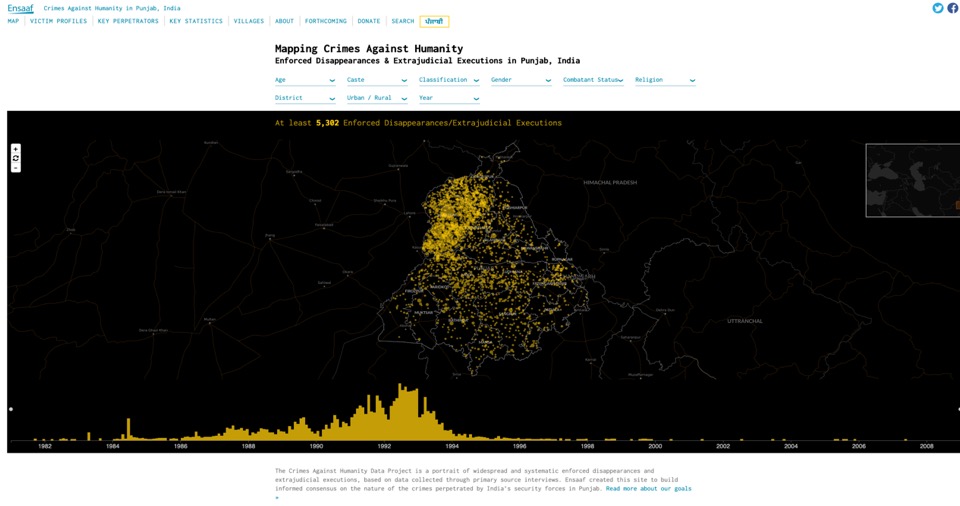 What happened to female victims of crimes against humanity?

This represents only a portion of the information Ensaaf has collected. As Ensaaf has continued to process its data and release information on perpetrators and develop a companion video testimonial site, we asked ourselves about the unique experiences of the female victims. Did security forces target them for different reasons? Did they suffer different patterns of abuse? Who held the information on what the female victims experienced? Documenting Female Victims will provide the resources Ensaaf needs to answer these questions. 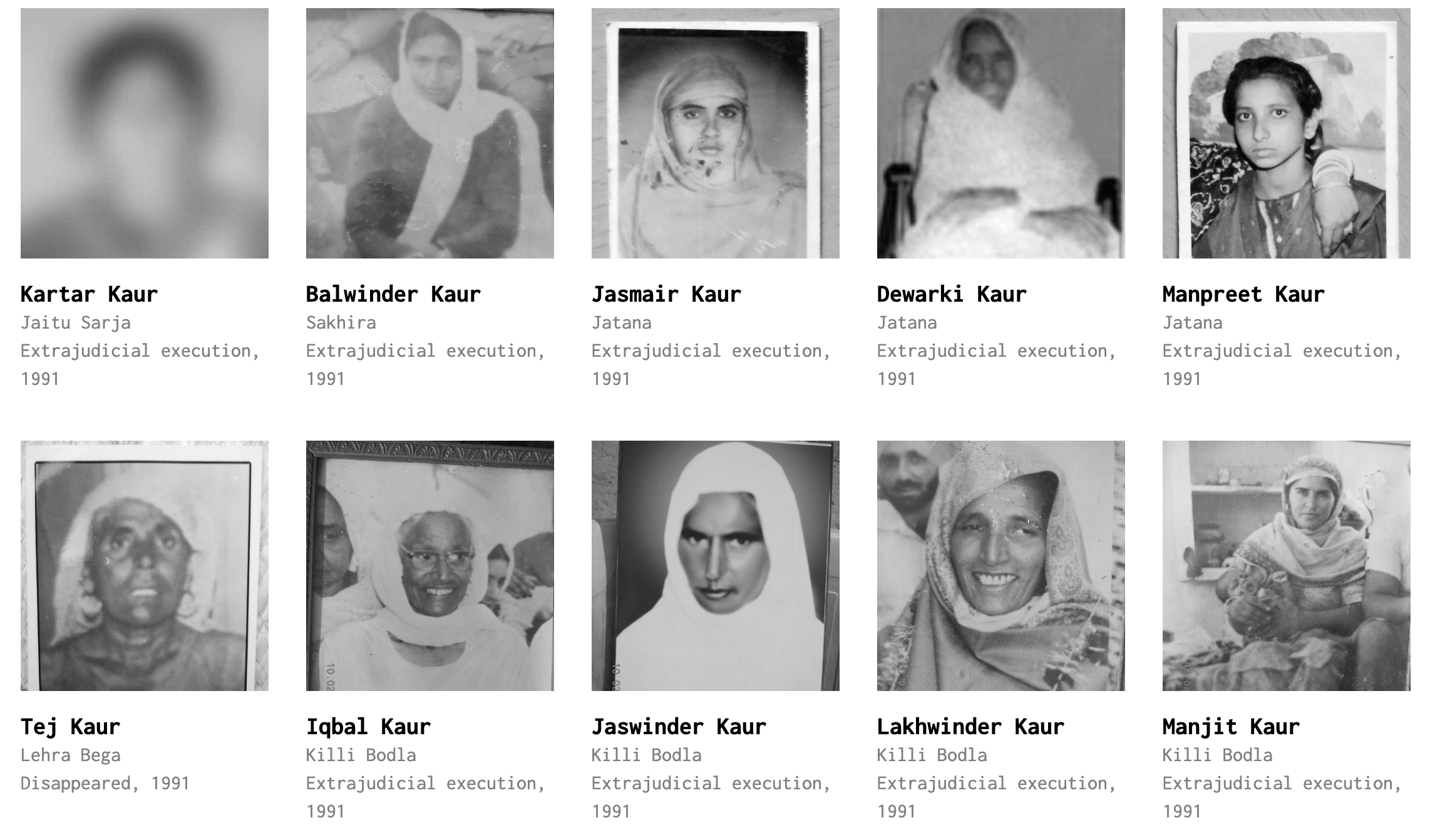 What are the goals of the project?

My daughter had just stopped milking two buckets of milk. She was on the third bucket of milk when the firing [from police at militants running towards our house] began. I called out to my daughter, “Come here!” While she was coming towards me, a bullet hit her in the waist. The bullet hit [her] on one side, exited through the other, and lodged itself in the wall. The bucket of milk fell from her hands, and the milk spilled. Blood mixed with milk.

This project will provide detailed information on 121 female victims of unlawful killing or disappearance in Punjab. This will include:

How will your donation help?

My niece was young. She was studying in the 7th grade… It was the morning of the 31st, and my mother, my sister-in-law, my niece, and my grandson were at home. My grandson couldn’t walk, due to polio. Ajit Singh Poohla, a police operative, came to our house with police officials. The Granthi of our village saw the cars arriving. [They] came to our house and shot and killed my mother, my niece, my sister-in-law, and my grandson. Then, [they] lit the house on fire.

Your donation will cover measurable outputs. Cleaning and clarifying the additional 45+ variables, and writing a detailed summary for each case is estimated to cost $1,000 per profile; we have 121 profiles to complete. The creation of a data visualization is budgeted to cost $2000 per visualization. Further, we have 2 more video testimonials to finalize on female victims, and each video's cost approaches $5,000 for the translation, transcription, and editing. A detailed report on the experiences of female victims is budgeted at $8,000. The total project cost amounts to $143,000.

Testimonies of Truth: A Video Archive

This donation covers the costs for preparing the case summary and family reflections of one female victim of unlawful killing or enforced disappearance in Punjab.

This donation allows Ensaaf to clean an additional 20+ variables, fully completing a victim's profile on our data visualization site. Further, Ensaaf will share a detailed case summary and family reflections.

This covers the data analysis and graphic design to create a data visualization focusing on the different experiences of abuse for female victims, as compared to male victims.