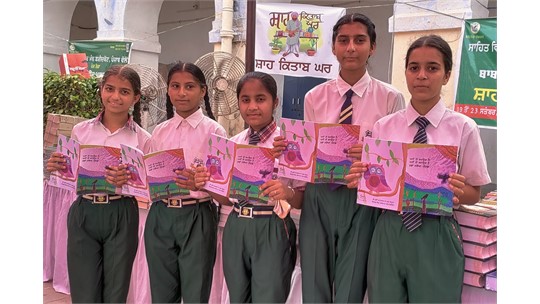 We all must care for the environment where-ever we live; yet we can't help but think of Punjab - the land he loved so much.

You must have heard by now that Punjab, the land of five rivers, is estimated to turn into a desert by the middle of the 21st century. This is only about twenty-five years away. What it means is that Punjabis will have no access to fresh groundwater and the land will be too hot and barren to produce any food.

Can you imagine the land of Guru Nanak, Punjab, without air, water, and food?

It is already happening. Punjab’s (read hereafter as East Punjab) aquifers are already depleted in some places. There are hundreds of villages in the Fazilka and Faridkot districts that don’t have access to fresh drinking water and people have to buy water procured from canals several kilometers away, sometimes spending a whole day fetching it themselves. There are fruit orchards in southern Punjab that are parching and drying up, destroying the livelihood of many farmers.

Punjab's water and air are contaminating beyond imagination and sick people are resorting to buying not only water but air purifiers. Water coming from tube wells or rivers in many places is loaded with sewage and toxic waste. There are many villages in the Ludhiana district where water has gone poisonous from industrial effluents. A significant population including children are developing cancer, teeth and bone deformity, and even brain damage because of this toxic water. Children as young as ten years of age have gray hair and rotten teeth. Bathinda is already known as the cancer belt of India. Overload of chemicals, radiation, and air pollution from the coal-based power plant has caused a dramatic increase in birth defects, physical, and mental abnormalities.

How have we come this far? What can we do?

This summer I decided to act to do something in my capacity. I spent a lot of time researching and documenting in a simple language, ten reasons that are behind the environmental degradation of Punjab. I wanted to make the new generation aware of them and give them action items to work on each of the reasons -- individually or in communities. I also included information on people that are actually making a difference in the identified areas; the end product -- a 40-page illustrated booklet that sums up the environmental crisis in Punjab.

We were able to print 5000 copies of this booklet in Punjabi and are in the process of contacting different environmentally conscious minds and asking them to create workshops and distribute these booklets. We are also distributing them free-of-charge in schools, libraries and working with a farmers organization to propagate the message. I am also working on the English version.

My hope is that by creating an awareness and empowering the youth, we are able to at-least sow a seed of reversal of this damage.

In the coming year we aim to print 10,000 more copies of the Nava Naroa Punjab booklet to educate Punjab about the situation in order to effect a change.

I hope you will support this cause and together we can at least create the much needed awareness and instill a responsibility for the change.

You donation will help print and distribution of 50 copies of Nava Naroa Punjab booklet.